About a week or so ago we started foster-parenting Milo. Milo is a two year old boy kitty who started his life in a rough way, on the streets of Boston. When he was found, they thought he was a female kitty ‘cuz he was taking care of an abandoned kitten. 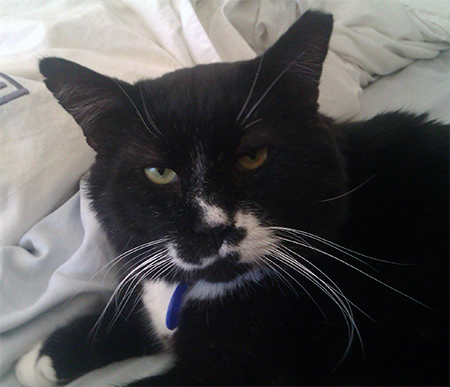 We took him in and are falling in love with him. He has what we refer to as “insta-purr” – the minute you touch him he’s happy as a clam being pet, rubbed, scratched, and otherwise paid attention to. He’s a HUGE galoot running about 20 pounds – and he doesn’t have that much weight to lose – he’s just a big damn cat! He’s a serious sweetheart of a cat. Off-the-charts loving and lovable.

Unfortunately he’s FIV positive – a result of living on the streets for so long. Apparently as much as five percent of the cat population is FIV positive now. It’s not dangerous to humans, but it’s a bummer for all involved. We’re keeping him isolated from the other cats – though he’s had a few carefully-supervised excursions throughout the house.