About six months ago, I posted the photo below on Facebook, with no explanation of what was written on my arm. A few folks asked and I replied that it was a blog post I had yet to write. Well, I’m writing it! 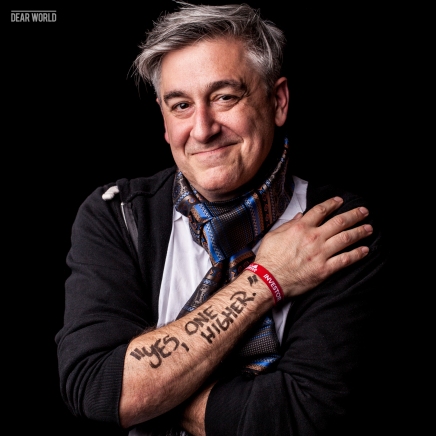 When I was in Lisbon last year for Web Summit, my dear friend Peter Bodenheimer invited me to a fantastic party hosted by Chris Schultz and his lovely better half Anne Driscoll. Pete, Chris, and Anne are all NOLA troublemakers. Another NOLA troublemaker is Robert X. Fogarty, the founder of DearWorld.me. Dear World has done some AMAZING portraiture over the years since Hurricane Katrina, and I was beyond honored to be included in their panoply of portraits, as they had arranged to have one of their photographers at this party in Lisbon.

Dear World collects imagery of people and their messages – messages written on their hands, arms, and elsewhere. Hit the link above for all sorts of interesting portraits and stories. So what was the story on my arm, you ask?

When my son was admitted to Mass General, the doctors were amazed at how high his white blood count was. Through the first day or two I kept asking the doctors how bad his white count was. None of them would really answer me. They’d share a number, but I had no way to grok how that stacked up against a normal number or an outrageous number. When I pushed, I’d get answers like “it’s really high”. His counts were so high that they couldn’t risk anesthetizing him when they put in his first port in (a PICC line, if I’m remembering correctly) during that first night at the hospital. Part of me died that evening holding his hand while he endured that ordeal. His mother had to leave the room. It wasn’t something I’d wish on my worst enemy.

All through all the countless blood tests, pokes, prods, and various scans and x-rays, I kept asking how bad he was. It was crystal clear he was in shitty shape – by any measure. I didn’t have to be a doctor to see how fucked he was. Everybody was doing a lot of crying and worrying and fretting. All I could get out of the docs for the first couple days was that his counts were “really high”.

In addition to the problem of fucked-up white cells crowding out useful red cells et. al., the bigger problem is that you can’t just snap your fingers and kill all those bad cells. If you did, there’d be a river of sludge in his veins and arteries that would just shut down the system. The mechanisms that kill those cells cause ‘lysis’: the bad cell ruptures and dies – which is great – but the body has to clean that shit up, and that takes time. So you have to kill these bad cells slowly enough so the mess can be cleaned up, but fast enough so the disease doesn’t get further out of control (remember that the A in ALL stands for Acute).

Once my son was stabilized, we just had to wait and hope the counts went down with treatment – but not too fast. I knew he was in bad shape, but I didn’t know how bad. On the second night (maybe it was the third) at around 0200 or 0300 I saw one of the docs from the pediatric hematology-oncology group outside of his room. I didn’t know the dude from Adam, but I did know that he was easily the oldest doc of the group that I had seen to-date. I figured if anybody had real context, he did.

I was a mess from lack of sleep, but walked out and said hello to him. He was reviewing paperwork. I casually said “Pretty high counts, huh?” He responded “Yes, very high.” Then, mostly because I’m an idiot, I asked the question I didn’t really want the answer to: “Have you ever seen counts so high before?”

He paused and was clearly mentally flipping through a rolodex of test results he had collected over his undoubtedly extensive career. Finally, he responded “Yes, one higher.” This 60-something or 70-something pediatric oncologist had seen one single patient in his long career with worse numbers than my son.

At that point I stepped off the ledge and asked the moronic question “What happened to that kid?” By some miracle – or perhaps he was just mercifully lying to me – he responded “He’s doing great now. He’s 17. I just saw him not too long ago for a checkup.”

So that’s the story of “yes, one higher.” Thankfully, the myriad treatments at MGH cleared my son of his cancer. He’s almost seventeen now, and is still cancer-free. Touch wood.