I recently re-stumbled across this ad campaign and wanted to do a quick blog post on it for those who might not have seen it originally. I was spurred on to finally create this post by Facebook God, who recently asked for suggestions on new commandments – to which I instinctively suggested “Thou shall not hate.”

Started by Benetton Group, Unhate is a foundation which “seeks to contribute to the creation of a new culture against hate.” Tough to argue with that goal, IMO. In 2011 they released a campaign of world leaders smooching. Yes, they are thusly dated a bit. Some of the images sparked shitstorms. Why the outrage? Well, because of ‘hate,’ that’s why. I think they’re all stupendous. Enjoy! 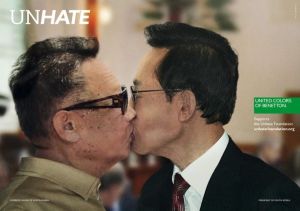 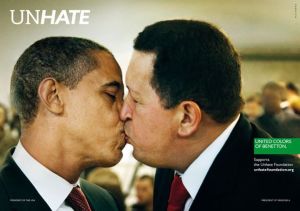 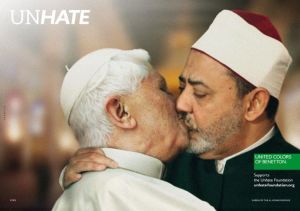 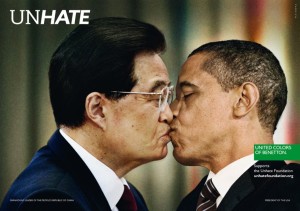 Both of these made me chuckle. Thought I’d share. Click through the images to find them on StickerGiant.

I was touched by President Obama’s eulogy of Senator Kennedy today. Click here to view the video on FOX or click here to read a transcript on NPR.

“On you the carefree youngest brother fell a burden a hero would have begged to be spared. We are all going to make it because you were always there with your love.”  – Jacqueline Kennedy

I’ve seen this quote (or perhaps “set of quotes”) a number of times over the past ten years or so. South Carolina governor Mark Sanford recently referenced these thoughts in a CATO article (can’t find it online) and it struck me as particularly poignant given the trillions of dollars we are sucking out of our childrens’ pockets these days.

A democracy cannot exist as a permanent form of government. It can only exist until the voters discover that they can vote themselves largesse from the public treasury. From that moment on, the majority always votes for the candidates promising the most benefits from the public treasury with the result that a democracy always collapses over loose fiscal policy, always followed by a dictatorship. The average age of the world’s greatest civilizations has been 200 years.Great nations rise and fall. The people go from bondage to spiritual truth, to great courage, from courage to liberty, from liberty to abundance, from abundance to selfishness, from selfishness to complacency, from complacency to apathy, from apathy to dependence, from dependence back again to bondage.

… I thought maybe the MA legislature wasn’t available for purchase by special interests!

How comforting to know I was wrong!

Can’t begin to express how giddily happy I am to see my hard-earned state tax dollars being spent to appeal a US District Court decision that barely makes an iota of a dent in the inane, outdated laws we have about when and how I can buy wine.

Why do I live in this state?

According to many folks, I “threw my vote away” today. I voted for the Libertarian candidate for President Bob Barr.

The quotes below, from Bob Barr’s final video push to his supporters and undecided voters, sums up most of my perspective (emphasis mine):

[P]oll numbers … are at record levels for the Libertarian party, and it’s because of … the message that … positive movement to shrink the size, the scope, the cost, and the power of the Federal Government really is possible.

[S]ome folks say “well, you know, the lines are just too long.” Doesn’t matter!!! I don’t care if you have to wait in line for five hours. It is that important … to show America that we’re tired of the status quo two party monopoly system that has done so much damage to this country.

Government is too big, too expensive, too involved, and too intrusive. If we are in fact, as the founders intended, a constitutional republic of aggregated states, then we should behave as such, and not as a single monolithic state. The two party system has played a lead role in the corruption that has seeped into politics and governing over the decades. National elections today are not about issues, problem-solving, tough choices, and deep thinking. National elections are about 30-second commercials, 90-second answers to debate questions, special interests, and who can spend the most obscene amount of money. National elections today are about getting elected, and nothing else. This should make you sad and/or frustrated. If the two parties agree to this sort of insane behavior (be that agreement explicit or implicit) the voters lose. In my opinion, there desperately needs to be an alternative.

Since I live in Massachusetts, my voice doesn’t matter all that much. Our 12 electoral college votes are going for Obama whether I vote for Obama, Barr, or my left testicle. I took this (sad?) fact as an opportunity to hopefully help third parties get a leg up for the next time around. All the better if it specifically helps the Libertarians (he says, raising his CATO Institute coffee tumbler). If I lived in a state that actually had a chance of going one way or another, I would have voted for Obama. Obama seems exceptionally smart, clueful, and sharp – and we really need that now; he seems to genuinely have a je ne sais quoi that might help move the country in a useful direction; and Palin absolutely scares the shit out of me.

This is a great anecdote about the 68th Governor of the Commonwealth of Massachusetts William F. Weld from his Wikipedia article:

William Weld has a sense of humor about his background; when Massachusetts Senate president Billy Bulger publicly teased him about his ancestors having come over on the Mayflower, Weld rose on the dais with a correction: “Actually, they weren’t on the Mayflower. They sent the servants over first to get the cottage ready.”

Someday, I hope, Americans will figure out that promulgating hate is not a constructive behavior pattern.

Hate of non-white people, same-sex couples, and countless other forms of irrational discrimination does not generate any useful upside for anybody in the long term.

Burnt cycles, burnt children, burnt lives. Grow up. Get over it.

I nearly drove off the road this morning when I heard the following come out of Obama strategist David Axelrod‘s mouth on the radio in response to a question about whether “racial concerns have made this race a little closer than it would otherwise be”:

I think that if there are voters who are motivated that way, they’re unlikely to be voting for the Democratic nominee

Of course the interviewer immediately then played a clip from a racist (white, female, stupid) Democrat.

Racism knows no political party. I hope Obama doesn’t lose an election because his people are as clueless as they sound.